Focusing geofencing tech on micromobility instead of cars

Matthew Pencharz, Voi Head of Policy, UK, Ireland & the Netherlands, discusses why geofencing tech should be driven by the micromobility industry.
Opinion

Geofencing technology is central to the success of micromobility to transform our cities into places that are free from congestion and pollution. Geofencing is a virtual tool in which software uses GPS or similar technology to remotely control the movement of vehicles, either in a pre-programmed way, or in real time.

With shared e-scooters, we use geofencing to put in place operational and parking zones, both of which are carefully designed in partnership with local authorities to facilitate a fair, accessible and safe micromobility scheme. As well as enabling us to put in place, for example, Slow Speed Zones in shared spaces such as pedestrianised areas, geofencing also allows us to switch off scooter access during busy one-off events such as festivals. It is at the heart of making shared micromobility work for all.

As a Swedish company we are also very aware of the fact that our home country has been leading the way in applying geofencing technology in trials to reduce access, speed and pollution by cars and other motorised vehicles within cities. I believe, however, that geofencing should be seen as a driver of behaviour change rather than one to further the cause of the car industry which will, in turn, lead to further negative influences on city infrastructure.

In Sweden, geofencing research and trials were put in place following the terrorist attack of 2017, when a truck was used as a weapon by being driven into a department store in central Stockholm, killing five people. The Swedish Transport Association put the trial of digital fences into action to see if it was possible to avoid such actions by slowing or banning vehicles from specific areas.

Getting stuck behind the fence of progress

Car manufacturers such as Volvo got behind the trials which have taken place in Stockholm and Gothenburg, as well as Oslo in Norway. The results have been positive, showing that geofencing can be used to change the speed of cars driving within a zone based on factors such as weather, traffic conditions or pedestrian density. They also trialled the ability to automatically change connected hybrid vehicles from internal combustion (ICE) to electric mode when entering low emission zones. The latter is neat but it is also the nub of the debate from Voi’s standpoint, which strives towards cities free of congestion, and reducing the numbers of cars in our towns and cities. We cannot meet our climate goals by simply swapping ICE vehicles to zero emission ones. Even at the climate conference COP26, the general discussion was about doing exactly that, and that will be the case if geofencing is trialled largely in the interests of the car manufacturers.

We in the micromobility industry do benefit hugely from geofencing technology and so it is vital that we are involved in its development. The application of geofencing technology to the public transport sector, for example, is of particular interest to us. Gothenburg has had geofencing trials in place since 2015 on public transport, with buses on specific routes being automatically slowed down near schools, busy intersections and other speed sensitive areas.

With micromobility playing a complementary role to public transport in many towns and cities, geofencing can only serve to strengthen these symbiotic services. Indeed, a growing number of Voi riders combine micromobility with public transport – over 17% in the UK and 47% across the rest of Europe where e-scooters have been available for longer.

Johannes Berg, Senior Advisor for Digitisation at the Swedish Transport Administration said, in a webinar for the Eno Center for Transportation on Geofencing and the potential of connected vehicles: “The purpose of the R&D programme is to develop solutions that can provide a standard use of geofencing as a tool in controlling the use of the transport system from a sustainability perspective.” If it is to be truly sustainable, it must also encompass the potential for micromobility, connecting people to their cities in ways that are inclusive, sustainable, affordable and reliable.

Voi is working in line with the UN Sustainable Development Goal SDG 12: Responsible Consumption and Production, and as part of this, we are intent on championing a transition away from the privately-owned internal combustion engine towards shared electric mobility as part of a circular economy. If the funding and findings of geofencing technology continue to be driven by the automobile industry, followed by any resulting legislation and regulation, the potential for improved infrastructures that create better cities for living and safer environments for all to thrive will be put into an automatic slow zone. 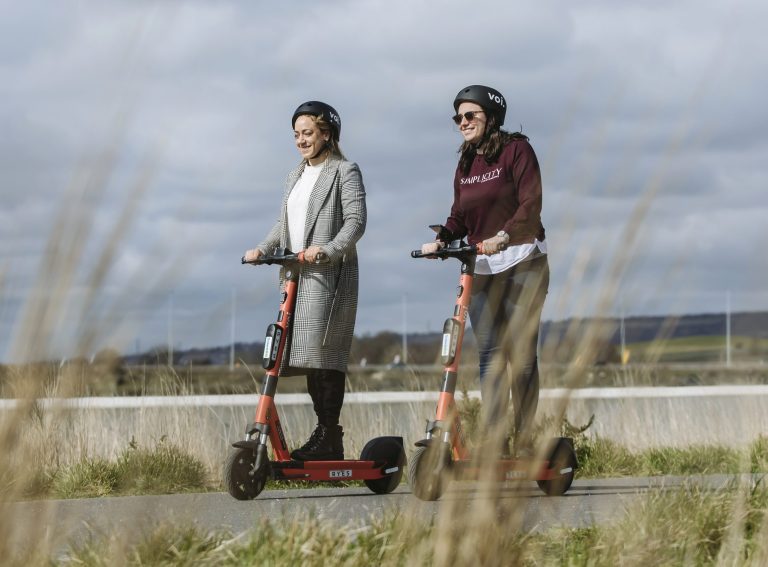